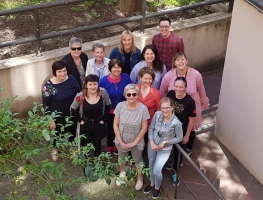 My name is Sanjin and along with Hana, I am a national tutor for the BRIGHTS project in Croatia. I would like to share with you our experience with BRIGHTS Face 2 Face Workshops we did in Rijeka last month. We had 26 participants that we decided to split into two two-day Face 2 Face workshops. First took place on the 19th and 20th of April, while the second one was 23rd and 24th of April.

Our participants joined us from all around Croatia. We had teachers, headmasters, youth workers with all kinds of different backgrounds - the groups were very diverse which added to the experience sharing part of the workshops.

During the workshops, we went through the BRIGHTS methodology and showed our participants how a workshop with their youngsters back at their schools/organizations/centres will look like. We did the story circle, for which the participants very quickly found out why it's also called a circle of trust. Although BRIGHTS project has several GCE themes covered by the project we decided to pick our theme for the workshop beforehand - Gender equality. We decided to do this to better concentrate our group in one, same direction so that we could achieve the goals of the workshop. We found that everyone can relate to this subject in one way or another and the stories that came out were great. We had some more intimate and some more general stories, some were funny while others were more serious. But one thing is for sure, everyone had a voice of their own during the workshops, everyone's thoughts were heard, feedback was given and every question was answered. I think that those two days, although short, were enough to get to know each other very well, share experience and maybe even start new friendships. One thing we had some problems with during the workshops was The DaVinci Resolve video editing software. It was hard to run the software correctly on some of the "weaker" computers and on some laptops the program crashed a lot. Never the less we helped each other out and managed to create all digital stories and had fun in the process.

Hana and I can't wait to see digital stories on the GCE subjects of our participants' youngsters. We are sure there are some great stories to be told. :)

PS: One thing we all learned - Dixit cards are great! 😃”