Presentation of project BRIGHTS during festival for combating multiple discrimination 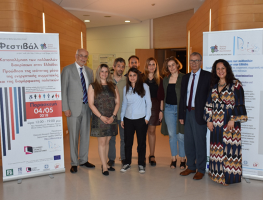 Α one-day festival on combating discrimination against stereotypes and prejudices and promoting respect for diversity and human rights was organized by the DAISSy research group of HOU on Friday 4 May 2018 in the amphitheater of the new Archaeological Museum of Patras. The festival was among the awareness raising activities implemented by the project “Tackling multiple discrimination in Greece: Delivering equality by active exploration and enabling policy interventions” (project number JUST2015RDISAGDISC9507), which is coordinated by the National Centre for Social Research (EKKE) with HOU participating as partner.

The main objectives of the festival were the exchange of good practices on combating discrimination and the development of dialogue about human rights and the content of European and national policy on multiple discrimination. During the festival, interesting speeches on the types of multiple discrimination and the extent to which they appear in Greece were delivered by EKKE researchers Dionysis Balourdos, Nikos Sarris and Elena Georgakakou, followed by the presentation of related good practices and projects by an excellent group of researchers, project managers, teachers, cultural educators, activists and volunteers. The speakers highlighted good practices in combating stereotypes in vulnerable groups, application of effective "tools" in this field as well as successful examples of actions exploiting diversity as a parameter of further activation for the benefit of both personal development and the progress of society as a whole.

Prof. Achilles Kameas (DAISSy research group of HOU) presented project BRIGHTS as a good practice of promoting inclusion by educating teachers and students on the notion of Global Citizenship. Achilles presented the aim and objectives of the project, the results of needs analysis and the outcomes achieved to date. He focused on the BRIGHTS training curriculum and presented in detail the MOOC on Promoting Global Citizenship Education using Digital Storytelling that has been produced by the project partners.

During the second part of the festival, local Associations of Migrant Communities played a leading role by carrying out cultural activities aiming at highlighting human values and solidarity among all people. In this context, different acts were implemented by the Association of Romanian Community “LUCEAFARUL”, the Association of Albanian Community “EMIGRANTI” and the Association of the Bulgarian Community of Patras. Emphasis was put on the realization of events by young people who exploited video, music, singing, dancing and narration (giving the opportunity to the different languages to be heard) in order to present topics related to solidarity, equality and diversity.

The festival attracted about 60 participants from public and private organizations of the Region of Western Greece, including Education Directors, School teachers, NGO owners, VET managers, Cultural organization managers, Journalists, Researchers, Students and Volunteers. All of them received the BRIGHTS brochure as part of their conference pack; many of them expressed strong interest in the project and were given the project contact points for further information.