Promotion of project BRIGHTS at the “Spoudase” Festival 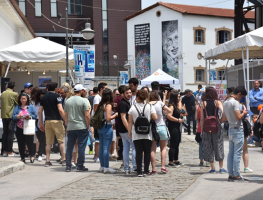 “Spoudase” Festival, the biggest festival for all levels of Education in Greece, was organized for the second consecutive year at the Technopolis of the City of Athens on 19 & 20 May 2018.

The Festival hosted more than 300 participants from all levels of education, which communicated and presented programs, activities and exhibits related to Education, Training, Innovation, Science and Technology. It was a major event, during which visitors got acquainted with educational and scientific courses linking education, skills, training and lifelong learning with career, creativity, growth, entrepreneurship and, in general, production and labor market needs. More than 70 schools were hosted at the Festival and presented their activities in sciences and new technologies. In addition to the booths and stands, more than 200 workshops and seminars were held free of charge by leading scientists, institutions, universities and market executives.

The DAISSy research group of Hellenic Open University participated in the “Spoudase” Festival with its own booth, promoting its research activities and projects. Four big screens were set up, each displaying videos about the DAISSy group, the various projects that the group participates in and their products.

One of the screens was dedicated to the promotion of the MOOC on “Promoting Global Citizenship Education using Digital Storytelling” that was produced in the context of project BRIGHTS. A specially created video based on the MOOC content was playing constantly on the screen, enhanced with slides promoting BRIGHTS project outcomes. Moreover, a banner promoting DAISSy supported MOOCs was permanently on display. Booth visitors were informed by DAISSy personnel about the contents of the MOOC and the objectives of the project and were handed the project brochure. Thanks to its central location, the DAISSy booth attracted more than 500 visitors, all of whom expressed their interest in the project and especially in the MOOC. 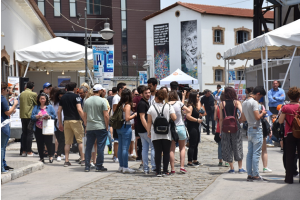 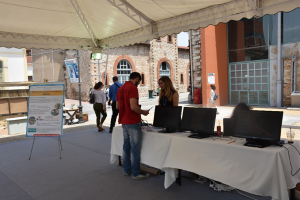 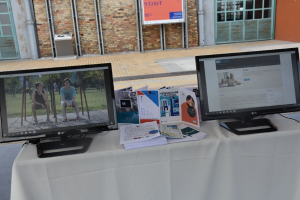 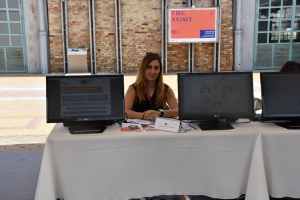