Promotion of project BRIGHTS during the PatrasIQ event 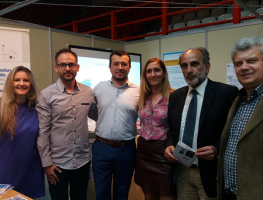 PatrasIQ is a three-day event organized annually by the three Higher Education Institutions of the Region of Western Greece (among them the Hellenic Open University) with the support of the Ministry of Education, the Ministry of Finance & Development and the Region of Western Greece. This year, the event took place between April 17 and 29 at the closed sports arena “D. Tofalos” in Patras.

The PatrasIQ 2018 event hosted more than 80 exhibitors (Universities, research centers, regional authorities, companies and start ups etc.) and attracted more than 5.500 visitors. The DAISSy research group of HOU had its own independent booth (#53), where DAISSy personnel presented the results of the research projects in which the group participates.

The BRIGHTS project was one of the main attractions in the DAISSy booth. A promotional video produced specially for the event was playing constantly on a large screen, while a dedicated workstation provided on-site access to the BRIGHTS MOOC (the video can be accessed here. The DAISSy personnel explained to visitors the objectives of the BRIGHTS project and the contents of the MOOC and then invited them to register and take a guided short tour. All visitors received the BRIGHTS brochure and were given the project contact points for further information.

The DAISSy booth attracted the interest of numerous visitors, both citizens and representatives of national and local authorities and organizations (in the sectors of entrepreneurship, research, education, culture, sports, etc.). It is noteworthy, that Mr. Nikos Pappas, Minister of “Digital Policy, Telecommunications and Information”, Mr. Apostolos Katsifaras, Secretary General of the Region of Western Greece, and Prof. Ioannis Kalavrouziotis, Dean of School of Science & Technology of HOU, visited the booth and were informed about the BRIGHTS project.